Access to Upper Campus and other new transportation options this fall 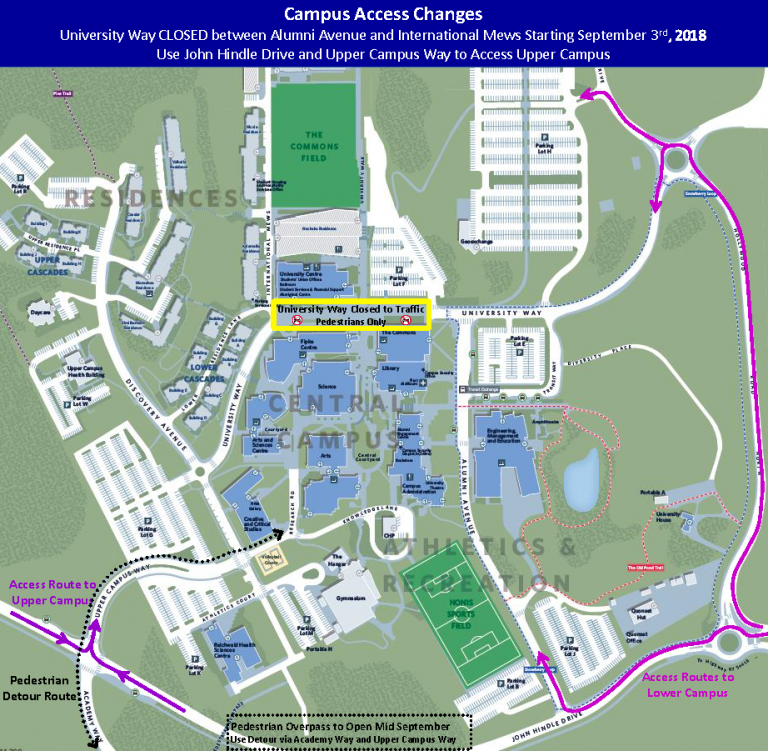 There are many new changes to transportation to, from and around UBC Okanagan coming this fall.

The following updates will help you plan ahead and make the first day of the academic year as smooth as possible.

The City of Kelowna’s John Hindle Drive extension project is complete and the new access road —  Upper Campus Way — will be open on Sept. 4 for the start of the academic year.

The City of Kelowna has also indicated that the new pedestrian overpass that crosses John Hindle Drive is also nearing completion. It is expected to be open and ready for use by mid-Sept.

Until the overpass is complete, all pedestrians travelling between the Academy Hill neighbourhood and the university are to use the new sidewalk along Academy Way and Upper Campus Way. Crossings at Alumni Avenue will no longer be permitted.

Pedestrians can also utilize one of the new transit routes connecting the Academy Hill neighbourhood to the campus.

After the annual residence move-in process on Sept. 2, University Way between International Mews and the entrance to Parking Lot F will be permanently closed to traffic to create a pedestrian-only space for the campus community.

All motor vehicles are to use John Hindle Drive between Hollywood Road North and Upper Campus Way to travel between Upper and Lower Campus.

Beyond these changes, there are a number of improvements to getting to UBC by transit or by bike.

The City of Kelowna and BCTransit are increasing the frequency and number of transit routes that serve campus, including changes to the routes that connect UBC to the Glenmore area and Lake Country. In addition, transit will go on Academy Way through the Academy Hill neighbourhood, which offers an alternative option for pedestrians to get to campus until the pedestrian overpass is complete. These changes come into effect on Sept 2.

Cyclists will also enjoy more access to campus via new and improved routes that will be completed by the City of Kelowna in September. These include a new bike path on John Hindle Drive, the Okanagan Rail Trail, an Academy Way bike lane as well as a number of other improvements.

More bike racks will also be installed around campus for the start of school in anticipation of more cyclists commuting to the university.

To find out more about these changes and how you can navigate to, from and around campus visit the UBC Okanagan Wayfinding Map and Transportation website.

Posted in Campus Planning and Development | Leave a response